In the morning preliminaries Carter bettered the 2003 Championship record of 54.94 set by Olympian Joshua Ilika of Mexico with a time of 53.87.In the evening’s final he would better that mark with a national record swim of 52.73. His previous national standard was 52.88 set in 2016. Teammate Christian Awah won the Silver in 55.78 and the Bronze went to N’Nhyn Fernander in a time of 56.07.

In the 200 metre breaststroke it was a tight battle between US Virgin Islands Adriel Sanes, Panama’s Edgar Crespo and Arnoldo Herrera of Costa Rica for the top spot. Sanes would prevail in a Championship record of 2:19.97 breaking his morning heats record swim of 2:21.64.Crespo won Silver in 2:20.01 and Herrera the Bronze in 2:20.83.

The 50 metre backstroke saw Christopher Courtis from Barbados winning in a time of 26.48 , not far off his national record of 26.21. Awah of Trinidad and Tobago again took the Silver .This time he posted a time of 26.93. The Bronze went Yeziel Morales of Puerto Rico in 26.95.

The 18 and over 200 metre freestyle mixed relay went to Trinidad and Tobago. Their team of Carter, Joshua Romany ,Kristin Julien and Cherelle Thompson crushed the previous meet record with a winning time of 1:38.40. The previous mark was 1:44.04. The team from Puerto Rico won Silver in a time 1:42.04 also under the old record .Panama won Bronze in 1:44.63.

The second night of finals at the 2017 CCCAN Championships saw Team Jamaica winning Four Gold One Silver and a Bronze. The team also set five national records in the afternoon. That bettered the record count of three in the morning preliminaries.

The first medal won the night was Gold by Nathaniel Thomas in the boys 11-12 50 metre backstroke race. After establishing himself as the favourite from the morning with his national record swim of 29.99 he won Gold in a time of 30.36 .That win was almost a second faster than the Silver medallist. It also gave him the Golden Double as he also won this event at the CARIFTA Games in The Bahamas earlier this year in 31.64. It is also the first medal Jamaica has won in the event for over a decade.

Heading into this meet Thomas had a number of close misses with the national record the boys 11-12 record of 1:04.27 held by Ramon James. He would have no such close call in the final of the event. He would win the Silver in a new national record of 1:03.65 just behind Panamanian winner Sebastian Lares 1:03.47. He again broke another decade old medal drought in the event.

In the 18 and over event Kelsie Campbell resisted a strong Challenge from Puerto Rico’s Patricia Casellas to win Gold in a new personal best of 1:03.23 to 1:03.65. That was just off the Championship record of 1:03.18 by Puerto Rico’s Debra Rodriquez. That is the first medal won by Jamaica since 2005 when Tamara Swaby won the Silver medal.

The mixed quartet of Zaneta Alavaranga, P’aige Lewis, Joshua –Daniel Alleyne and Nathaniel Thomas proved yet again they are the best sprint freestyle combination in their age group regionally. They took the 200 metre freestyle relay in a record time of 1:49.70.that bettered their morning mark of 1:51.59. This adds to the CARIFTA 400 mixed freestyle relay crown they won in April.

In a very tight final in the girls 50 metre backstroke Angara Sinclair just missed with a 4th place finish and new national record of 30.55.

Other finalists on the day included

The morning session of day two (June 29) of the CCCAN Championships in Trinidad and Tobago was highlighted by national record performances by Nathaniel Thomas, the 11-12 relay team of Thomas, Alvaranga, Lewis and Alleyne and Angara Sinclair.

Competing in the 50 metre backstroke Thomas became the first 11-12 swimmer from Jamaica to break the 30 seconds barrier. He topped the qualifiers with his new age group mark of 29.99. That swim is not far off the 2011 Championship record of 29.83 set by Panamanian Olle Harrison. The old Jamaican record of 30.25 was set by Olympian Timothy Wynter in 2009.He would combine talents with Zaneta Alvaranga, P’aige Lewis and Joshua-Daniel Alleyne to set a new national mark in the 11-12 mixed 200 metre freestyle relay with a time of 1:51.59. That time was also under the championship record of 1:54.99 set by Barbados in 2015. The team will be the second seed heading into the final as Bermuda set the new record at 1:51.42.

In the 15-17 girls 50 metre backstroke Angara recorded a big personal best of 30.75 to lower the 2009 national record of 30.85 held by Kendese Nangle. That swim seeds her as the third fastest in the event in contention for the Gold and 2011 Championship record of 30.48 held by Trinidad and Tobago’s Kimberlee John Williams

In the 11-12 girls age group Sabrina Lyn and Zaneta Alvaranga qualified third and fourth respectively with times of 1:07.42 and 1:07.87 respectively. Lyn’s national mark of 1:07.22 looks set to be lowered in the final later this evening. Alvaranga will be in another individual final as she qualified third fastest in the 50 metre backstroke in a time of 33.65.

In the 13-14 age group Kyle Sinclair and Brianna Anderson qualified 8th and 4th respectively for their respective 50 metre backstroke finals. Sinclair touched in 30.10 while Anderson stopped the clock in 32.31. In the 100 metre butterfly Emily MacDonald will contest the final after posting a time of 1:07.64 for 6th place.

In the 15-17 age group Bryanna Renuart and Jesse Marsh made the finals of the 200 metre breaststroke and 100 metre butterfly. Renuart is seeded third for the final after she touched in 2:46.54. Marsh got his hands to the wall in the two lap butterfly race in 58.10.

In the women’s 18 and over 100 metre butterfly Kelsie Campbell underlined her number one entry time when she topped the qualifiers with a time of 1:03.67.She will be looking to challenge the 2011 Championship record of 1:03.18 set by Puerto Rico’s Debra Rodriguez.

The first day of the 2017 CCCAN Championships being held at the Aquatic Centre in Trinidad and Tobago on Wednesday June 28 got off to great start with Championship records falling and World Championships standards being attained.

The first record to fall was in the women’s 15-17 800 metre freestyle. Olympian Valerie Gruest of Guatemala won emphatically posting a time of 8:40.30. That bettered 2009 standard of 8:44.17 set by Venezuelan Olympian Andreina Pinto. It was also under the World Championship B standard of 8:56.71.  The Silver went Ana Pastrana of Honduras in 9:27.11 and the Bronze to Myrangela Rodriquez in 9:29.90.

The 1500 metre freestyle record for the 18 and over men was smashed by distance ace Olympian Marcelo Acosta of El Salvador .He stopped the clock in a time of 15:39.51. He was well under the old 2009 record of 16:16.10 set by Guatemala’s Evan Marcus. That swim bettered the World Championship B standard of 15:44.74. Also under the Championship record was Christian Bayo of Puerto Rico who clocked 15:45.28 for the Silver medal. The Bronze was won by Avila Emilio in a time of 16:15.59.

In the women’s 18 and over category the Gold was won by Santis Gabriela of Guatemala in 9:16.91. Fatima Flores of El Salvador touched in 9:20.57 for the Silver medal and Marines Rosario of Puerto Rico was timed in 9:33.59 for the Bronze.

The 2017 CCCAN Championships got underway at the National Aquatic Centre in Trinidad and Tobago yesterday June 28 with Jamaica having one competitor in action. Britney Williams was the first swimmer to compete as she swam in the 800 metre freestyle in the 15-17 age group.

In her debut at the CCCAN Championships Williams swam against a high quality field to register a new personal best time of 9:35.59 and place fifth. That lowered her previous best by more than two seconds. The Gold medal in the event went to Valerie Gruest in 8:40.30 a new Championship record and World Championship B qualifying time.

The CCCAN Championships in Trinidad and Tobago  which will be held from June 28 to July 2 will be the venue for many quality performances in the swimming pool. One of the swimmers who will be adding to the fireworks is Elan Daley from Bermuda. The versatile youngster who is in her first year of the 11-12 age group gave a preview what fans should see  at the 2017 Age Group International  in Canada which was held from June 1 to 4.At that meet she lowered a number of 11-12 age group records.

The 100 metre butterfly saw Elan become the fastest 11-12 girl in the English speaking Caribbean when she clocked 1:05.55 (split time 29.79). The previous fastest time was held Trinidad and Tobago’s Tyla Martin at 1:06.05. That exact time is also the CCCAN Championship record held by Panama’s Juliet Stern set in 1995.

In the 200 metre individual medley she lowered her own record by more than 3 seconds to win Gold in a time of 2:27.63. That brings her closer to the Championship record of 2:27.38 by another 11-12 star the twin island Republic’s Cerian Gibbes. Cerian’s national record also doubles as the fastest in that age group for the English speaking Caribbean. In the 400 individual medley she dropped almost 9 seconds from another record she owned to clock 5:20.53 and place fourth.

The magical minute mark barrier was broken by Daley in the 100 metre freestyle.She split 28.41 at the 50 metre mark to touch in a final time of 59.90. That bettered her previous personal best and national mark of 1:00.28.That is faster than the Championship record of 1:00.05 by Puerto Rico’s Vanessa Garcia. It also gets closer to the fastest time in the English speaking Caribbean in that age group held by Gibbes at 59.27.

Daley along with swimmers from the other competing nations promises to make this CCCAN Championships one of the most exciting yet.

A   17 member Jamaican delegation will be in action in the swimming pool from the 28th of June to July 2 at the Aquatic Centre, Balmain, Couva in Trinidad.  The Championship which membership comprises federations from the Central American and Caribbean region has seen a number of outstanding performances from Jamaican athletes. Seven existing records at the meet are held by swimmers from the land of wood and water.

Leading the record tally is Olympian Janelle Atkinson with three. She holds marks in the 18 and over 800 metre freestyle 8:39.16, 400 metre freestyle 4:13.11 and 200 metre freestyle 2:02.57. All of those Championship standards were set at the 2001 edition of the meet in the Dominican Republic where she won Six Gold, One Silver and One Bronze.

Olympian Alia Atkinson has two 15-17 records from the 2005 Championships still standing. As expected they are in the breaststroke events. In the 50 metre race it is 33.12 and the 100 metre breaststroke race 1:13.93.The meet was again held in the Dominican Republic. Alia won an impressive Seven Gold ,One Silver and one Bronze.

Yet another Olympian Timothy Wynter has two records in his favoured backstroke events at the 2011 Puerto Rico meet in the 13-14 age group. His 50 metre standard stands at 26.96 and his 200 metre record at 2:09.55.His medal haul would consist of Two Gold, Two Silver and a Bronze.

In 2017 the Jamaican team  have 24 individual medal chances based upon the heat sheet.

In the 18 and over girls Kelsie Campbell has five good chances in the 50,100 and 200 metre freestyle events as well as the 50 metre butterfly races. In the 100 metre butterfly  she is seeded first. Her time of 1:03.48 is in striking range of the Championship record of 1:03.18 by Puerto Rico’s Debra Rodriquez.

Next up for a potentially large medal haul are the 11-12 sprinters Nathaniel Thomas and Zaneta Alvaranga. Both are in medal winning positions based on their entry times in the 50 and 100 metre freestyle races and 50 and 100 metre butterfly events. In the 50 metre butterfly in which both swimmers are ranked number 1 they will be seeking to lower their respective national records of 28.32 for Thomas and 28.95 for Alvaranga. Zaneta’s best time is almost a full second faster than the championship record of 29.85 by Venezuela’s Ángela Ciccenia.

Brianna Anderson will be looking to break the girls 13-14 50 metre backstroke record of 31.02 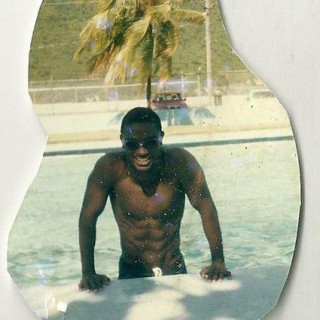